The present building was completed in 1720 and built on the site of a previous inn dating back to the late 1660's.

In more recent times from the early 50's until 1976 it was a public house called the commercial inn, but it also had another name locally, acquired by the more seedy clientele who used to frequent this harbour and dockside inn. It was nicknamed" the birdcage "where the local ladies would await the many sailors and merchant seamen visiting the port of Cowes.

In early 1976 Murray Dixon the nephew of the famous boat designer, boat builder, sailor, and all around wag Uffa Fox bought the commercial inn. He then set about converting the empty pub, using his skills as a boat builder learnt in his uncles boatyard into a restaurant. When it was finished he decided on Murrays as the name.

Murray along with his wife and daughters set about establishing a reputation for excellent seafood simply cooked. When Brian and Fran Bracken came along in 1990 they were determined to carry on with the same ideals of the Dixon's. They still adhere to that simple statement of "the best seafood simply cooked"

The restaurant continues to flourish and has many valued and distinguished customers among the local and yachting fraternity.

Where to Find Us: 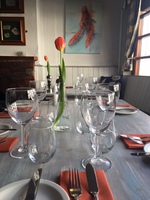 You have installed an adblocker. This Web App can only be displayed and edited correctly when the adblocker is disabled.